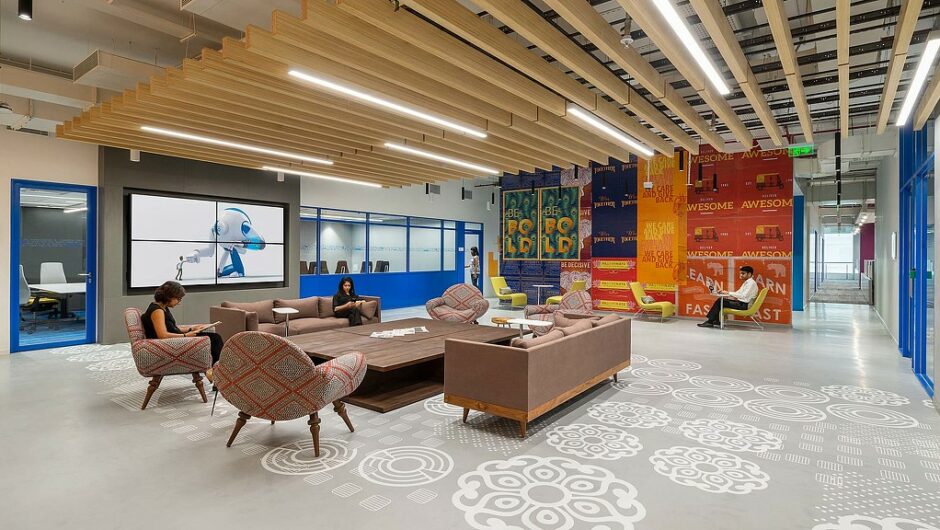 Early on in the pandemic, the Gensler Research Institute began conducting a series of workplace surveys in various countries around the world to understand how, and where, office workers want to work in a post-pandemic future. Our research is ongoing, and workers continue to experiment with how and where they work in the face of ongoing uncertainty around the virus, but after 18+ months we’re beginning to see some universal truths and patterns about the hybrid future of work.

One finding that has been highly stable over time and across multiple countries is that most office workers don’t want to make a binary choice between the office or home. Instead, they say they want a hybrid work model of both in-office and remote locations as they look to the future. In addition, all respondents we surveyed reported that the office is still the best place to connect, collaborate, and socialize with others.

Since March 2020, our research has explored how work was evolving during the pandemic, how worker expectations were shifting, and the impact the pandemic was having on the physical workplace. This global research surveyed 15,000 respondents in six countries: the United States, the U.K., Australia, France, China, and India. During our surveys in the U.S., the U.K., and Australia, about half of office workers were working from home. India was surveyed the beginning of their most recent spike in cases this spring, with slightly more than a third of workers working from home. In contrast, France and China were mostly back to the office during our research.

Universal truth: Workers want the best of both worlds

In all six countries, we explored the reasons why people were working the way they were, as well as how they prefer to work in the future and why.

Universally, leaders and office workers alike reported that working from home supports the ability to focus, improves well-being and work/life balance, and empowers them with flexibility. Note: In more recent data collections, it’s also clear that these positives are balanced with downsides: work/life is becoming unbalanced, and people are reporting high levels of stress and burnout, lack of awareness, loss of social connection, and loneliness.

One interesting surprise across all industries: The longer the commute, the greater preference for a hybrid model. There were no significant correlations to a full-time remote preference, but there was a clear correlation to reducing how many times a week people want to commute to work.

In our U.S. Workplace Survey 2016, we found that respondents on average spent four days in the office. Workers at the most innovative companies spent only three and a half days of their workweek in the office on average. More time out of the office correlated with higher creativity, innovation, and satisfaction. In our 2019 and 2020 (pre-COVID) studies, four days per week continued to be a highly stable benchmark for the average U.S. office worker — while the most innovative companies showed a slow progression toward more time spent out of the office, even pre-COVID.

We discovered similar habits in our 2021 China Workplace Survey, in which we surveyed workers who had already been back to the office for many months. As Chinese cities reopened in the summer of 2020, remote work shifted from working from home to working from anywhere. Chinese workers report spending 22% of their time working remotely from alternate offices, coworking sites, and third places such as coffee shops, parks, and libraries. China work locations in 2021 are very similar to what was reported in the 2016 data; even pre-pandemic, full-time in the office rarely meant spending the entire workweek in the office.

As companies explore their return to the office policies post-pandemic, understanding this pre-COVID benchmark is important: a return to “normal” would be three and a half to four days in the office for the average worker, not every day. A strategy with increased flexibility would be higher. 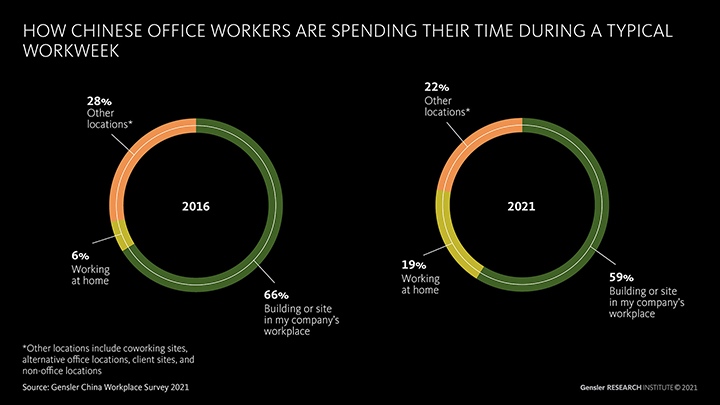 People want to come to the office to be with one another — but also to focus.

As we look to the future, we see that being in-person with other people is among the top reasons to come into the office. Working in-person with my team/colleagues was universally ranked as the #1 reason in all six countries, while socializing with colleagues, being part of the community, or impromptu face-to-face connections also ranked high. In particular, respondents reported that the office excels at supporting collaboration, awareness, problem solving, and inclusive communication.

Interestingly, “to focus on my work” was universally in the top four reasons people come to the office. Although many can focus well at home, a large portion of respondents around the world reported working from home to be lonely. Working alone, but being around other people, as well as having access to specialized technology or support, are important reasons to come to the office.

The office matters, and it’s more relevant than ever

Another consistent finding we’ve discovered in our research across multiple countries is that the office continues to play an important social role in people’s lives. The pandemic has forced us apart, and isolation has become an unhealthy reality for many. The office serves an important place for human connection. Many respondents say the workplace is where they form most of their new friendships — with the majority of respondents forming friendships with people of other races/ethnicities or generations.

The pandemic helped us remember what’s truly important — life with other people. This is true in our public spaces, our retail spaces, our cities, and certainly true in our workplaces. The opportunity we have now, is not to simply return to what was, but to create a new reimagined workplace experience that is purposeful, inclusive, healthy, and worth the commute.